My husband and I are quiet people. Which is a nice way of saying we’re boring. I write all day. He sleeps (he works nights) or watches ball games or movies.We don’t go out much.Our kids don’t call often. We’re the kind of people who could die in our home and no one would know until the letter carrier noticed a foul odor seeping from the door by the mailbox.

I can spend hours in the same place writing or reading or doing some kind of handcraft. Keith falls asleep in his recliner.

So I decided we needed a dog to liven things up. We’re too young to get old. We have a couple of cats, but you know. Cats. They do the same thing we do. Nothing. Except for the occasional swatting drama. Our cats are not best friends.

I looked at shelter and rescue sights. I was thinking a grown dog and not a puppy since we don’t have young kids to entertain it. But nothing really appealed to me. We test drove two full grown boxers–very sweet dogs, but there was 140 pounds of them–more than I wanted. Fortunately, someone else wanted them, so they went to a good home.

CoCo’s fisrt puppy picture, when I thought I might call her Poppy. How much cuter can a puppy be?

The dog we adopted came to us through a Facebook/church friend. Dom is the mother of two boys under the age of two and lives in a second story apartment. Her husband found a puppy at his job site–a school–and brought her home. Dom said, “Sorry, honey. You’re not home all week. No way I can deal with the kids and a puppy.” Wise woman.

Her ears flopped down when she was younger. Homemade toys–water bottle, old tee shirt.

I fell in love with the wiggly brindle bundle right away. She was very friendly. Her paws weren’t huge, indicating she wasn’t a horse in the making and she seemed smart. I brought her home and except for the needle teeth, and the puddles, she’s been a delight. Her dark brown/sable/tan coloring looks like a cup of coffee. Hence the name CoCo La’Tay.

Sleeping on a makeshift bed.

We started crate training right away. That’s her bed and she knows it and will go there when I tel her to. I just have to nudge her in. She loves playing fetch with old soda bottles–always brings it back so I can throw it again. Times 50. I love when she tears around the yard like her pants are on fire. She loves meeting new people, licking toes and chasing the cats she only wants to play with. She chews everything in sight. Although my floors no longer had crumbs on them, the do have muddy puppy prints. I have to remember I’m the alpha and make sure she listens to me.

As much as I wanted them to stay down and floppy, her ears decided to stand up. About 12 weeks old.

I can understand why writers have cats. Dogs need attention and in and out. At least puppies do. Having this pup has kept my mind distracted from concentrated periods of focused writing. But I did want something to get me off my butt. In a few weeks she’ll have all her shots and we can go on walks to the dog park and around the neighborhood. A dog is a great way to meet your neighbors.

At 15 weeks, she weighs 21 pounds and has more than doubled her weight. She’s a healthy dog. I wish I could know her story and how she came to that place to be found by my friend’s husband. 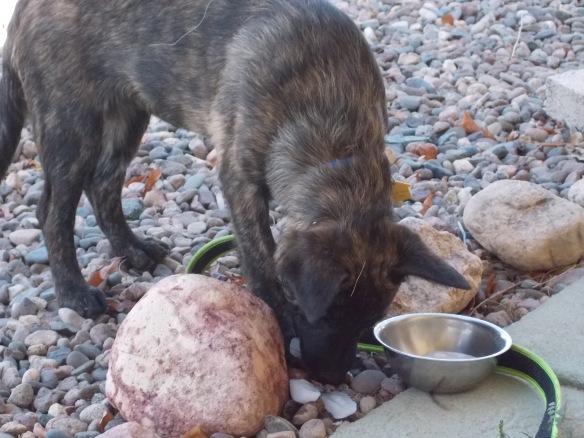 As puppy parents, Keith and I refer to each other and Mommy and Daddy again when we talk to the dog. Guess it’s better than the old man and the old woman.