Happy belated New Year! It’s still January, and the year is still new. 2013 got off to a rough start. My mother has 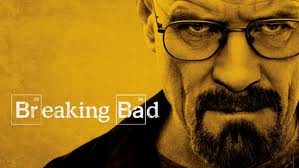 been very ill and the far off inevitable of her death became a very close possible. She’s doing better now, but the inevitable has just been stalled. It provided me with a moment to step back and see how I handle pain. I used to think I was a warm fuzzy, but when my defense mechanisms go up…well, I learned a few things.

With that going on, it was difficult to focus on writing. I did some creative writing for Lilyland 3, most of which probably won’t stick, but I can’t not write and my mind wasn’t in form for revising Places Bright and Dark (Lilyland 2) because that uses the analytical part of my brain or to say, my weaker part. So I did something I don’t so often–dove into a TV series on Netflix.

I’ve been hearing for years about how good Breaking Bad is. People and websites I respect and admire have been singing its praises, so I decided to see what the buzz is about.

The writers don’t pull any punches. A while back I posted  about what sucks me in as a reader and what I’m missing from many books I’m picking up these days. To sum it up, it’s meaty conflict! BB consistently has LOTS. I was well, shocked. Horrified. Entertained. Hooked.

The main character Walt, has major problems, big ones. And his solution–use his genius level chemistry background to make meth and sell it for enough money for his family (pregnant wife, teenage son with moderate disabilities) to be financially comfortable when he dies in less than a year from stage 3.5 lung cancer. Each step he takes becomes more and more complicated, each decision ripples out and involves more and more people. As he becomes painfully aware of some of the consequences of his choices, he is further dragged into the vortex and becomes what he had no clue he could ever be. To the point he difficult to like and relate to. But that’s part of the appeal.

I’m into the fourth season now. It’s graphically violent and the viewer isn’t spared. But that’s the nature of what Walt has gotten himself into. What he thought would be a few cooking sessions has turned into running with–and away from–people so greedy and desperate that taking a life to make apoint means nothing to them.

Even when the conflict isn’t physical or violent, it’s there. Making a tough choice, thinking it’s the right thing until fate intervenes. Family becoming involved. Lying. Premeditated murder. Choosing to take the next step into a dark place that was never the intended destination.

I made a few changes in my plot since beginning watching the show. No, it’s not violence. There are a few scenes I could have wrapped up nicely for Lily’s immediate happiness, but I took a harder road. So Lily has to as well, poor girl. I like a happy ending, sure. But by contrast, a happy ending is happier if it takes a lot of grit and agony to get there. If it weren’t for the dark, we wouldn’t appreciate the light and all that.

But at the same time, I have to be aware of my audience. I don’t claim to write straight out romance, at least I try not to. Readers expect something different then. One reviewer seemed very disappointed in Another Place on the Planet. She said it was  “awkward and depressing.” And I guess it would be to someone expecting roses and unicorns and happily ever after. When you get the aftermath of spousal abuse and the discovery of sex addiction, the roses wilt. Some people don’t like their escapes to remind them of real life. I totally get that.

But I also like to portray strong, growing people. We don’t grow as much when things are easy, even though those are the times we long for. But as with Walt’s dream of security for his family, our good times often come at a cost. Putting a vacation or a big Christmas on a credit card. Not exercising and making healthy food choices on a regular basis. Fun at the time, but at a price to be paid later.

We don’t pick up book and go to movies to see people happy all the time. Happy doesn’t make for interesting  entertainment for some reason. In my writer’s mind, I think up all kinds of things my characters do when life is going well for them. But it would be boring to read page after page or to watch scene after scene of quiet conversations and candlelight dinners.

It’s an interesting phenomenon to me and one I don’t expect to resolve. So, I’ll keep watching Breaking Bad for the entertainment value and the motivation to sock my characters with conflict every chance I get.

As a writer, do you find yourself saving your characters from pain by writing an easier resolution to their problems? Do you have a “won’t go there” line you won’t let your characters cross? Have you watched Breaking Bad? What do you think of it.

If you watch BrBa, here’s a little something…